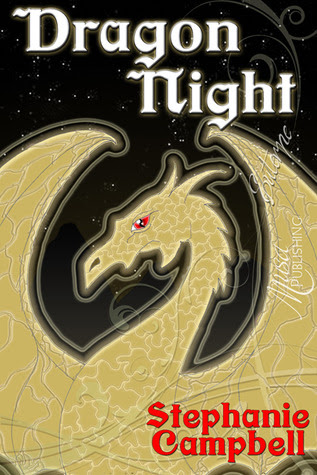 The only thing more shocking than discovering that dragons really exist is finding out that you are one.

Ever since he could remember, Ford was treated cruelly by his parents, Liddy and Wicker Forks. He cannot figure out why they hate him so much. It is only when he discovers that his father isn’t really Wicker Forks but instead is a mysterious, red-eyed stranger that he goes on a quest to find his true identity—and much, much more.

As he heads forward down the path of danger and illusion, he uncovers a world that he had never imagined, a world of dragons. Ford must decide who he is—a dragon or a boy—and whichever path he chooses will be his future for forever. After all, once you are a dragon, there is no going back.

My Thoughts:
I received this e-book in exchange for my honest review. I read the summary and was immediately interested because I love dragon stories.  Unfortunately, Dragon Night failed to make a good impression.

Dragon Night starts off introducing us to a woman who is going through a rough patch. Her husband is a gigantic a-hole and makes her hate her life.  On the way home one night she is attacked.  Speed forward 15 years and we are now introduced to her son, Ford.  Ford's parents treat him like crap. Worse then crap. They are abusive and mean and neglectful. Ford doesn't understand how or why he is treated this way. He finds out his mother was raped and that Wicker isn't his biological father.  Weird things start happening to Ford's body, excruciating pain, weird eyes, etc. Turns out Ford's father is a Dragon and that makes Ford a draconic - 1/2 human 1/2 dragon. He sets out on his own to find dear ole dad  and get some answers.

There are a lot of problems with this book. First, the writing. It needs a lot of editing and gleaning.  Like the whole thing.  The relationships are not believable and they all need to be more developed.   There are a LOT of inconsistencies with the characters and most especially with Ford's feelings.  The lack of anger over Ford's mother's rape did not sit well with me.   Ford was more upset over his father being a murderer then the fact that his mother was brutally attacked and violated. NOT cool.

Speaking of Ford. He was not a likable main character. Well let's face it,  none of the characters were likable. Ford is a broken, skittish, scared boy. Which is absolutely understandable with the way he has been treated his entire life. I didn't have a problem with that. What I did have a problem with was his entire lack of growth throughout the entire story until the very end when BAM all of  sudden everything is okay. I'll get to the ending in a minute. Ford needed some kind of redeeming trait/quality/spark..SOMETHING. I could not accept the way Ford's mother was written. Or Wicker.  They were too black and white. Which made accepting them as having changed at the end of the story completely ludicrous.  The build-up for this story was too slow.  I was bored most of the way through. I found the action and climax to be choppy and lackluster.

So. The ending. It managed to finish completely ruining this book and any redeeming qualities it had.

I usually never include spoilers in my review (unless it was the previous book in a series). But I just can't NOT address the ending of this book. The author does a good job of letting the reader know just how awful of a person Wicker is. He's a bastard, plain and simple. There is NOTHING redeeming about his character, no glimpse of a soul. So the mere fact that everyone was able to forgive and forget at the end and Ford just blindly accepted him and I was now supposed to believe they would be one big happy family...I MEAN NO JUST NO! That's not cool.  So Wicker treats his wife and son like scum and then that's okay at the end?? NOT OKAY.  Wicker should have been sent packing, and there needed to be some kind of showing of love from Ford's mom at the beginning of the story. She can be hurt, she can be angry, she can not want to look at Ford because he reminds her of the night she was attacked. But the reader needs SOMETHING to show that she loves her son if the ending is to be believable.

Now for the positives.
The general idea of the story was appealing. A boy finds out he's part dragon and goes off to find his father. I thought the author did a great job describing the pain Ford went through during his dragon transformations. I also enjoyed the dragon lore that the author created.

Unfortunately, the road Dragon Night was taken down ended at a dead end and the negatives outweighed the positives.


Bottom Line:  Due to the massive amount of inconsistencies and the ending, I can not recommend this book.  1/5
at 8:00 AM
Email ThisBlogThis!Share to TwitterShare to FacebookShare to Pinterest
Labels: 1/5, book review, dragon night, for review, Musa publishing, stephanie campbell