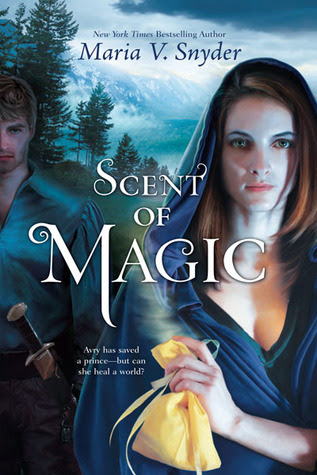 *This is book #2 in the Healer series*

As the last Healer in the Fifteen Realms, Avry of Kazan is in a unique position: in the minds of her friends and foes alike, she no longer exists. Despite her need to prevent the megalomanical King Tohon from winning control of the Realms, Avry is also determined to find her sister and repair their estrangement. And she must do it alone, as Kerrick, her partner and sole confident, returns to Alga to summon his country into battle.

Though she should be in hiding, Avry will do whatever she can to support Tohon’s opponents. Including infiltrating a holy army, evading magic sniffers, teaching forest skills to soldiers and figuring out how to stop Tohon’s most horrible creations yet; an army of the walking dead—human and animal alike and nearly impossible to defeat.

War is coming and Avry is alone. Unless she figures out how to do the impossible ... again.


Published: December 18, 2012
Source: Netgalley- For my honest review
Cover: NOT diggin' it


My Thoughts:
This review will contain spoilers from Book # 1: Touch of Power

The end of Touch of Power left us with the death of Avry as a result of healing Prince Ryne of the plague. Then she was brought back to life. Now you're caught up.

In Scent of Magic, Tohon is on a destructive murderous mission to become ruler of the 15 realms, leading his army of dead to crush anyone who gets in his way.  Taking advantage of everyone thinking she's dead, Avry infiltrates Jael's camp to get information and look out for Tohon spies. She's SUPPOSED to be laying low as she promised Kerrick.  But that doesn't work out so well.  Meanwhile Kerrick goes back to Ryne's camp to assist with war plans and runs into some difficulties of his own.

As far as sequels go, this one was pretty good. I didn't like it AS much as Touch of Power but it's a must read for fans of this series.

Kerrick and Avry are separated for about 80% of Scent of Magic. The supporting characters that I grew to love in the previous book don't show up as much. I missed their interactions and back and forth quibbling. I also missed the romance between Kerrick and Avry.  There's a lot of action in this book, but it's more focused on war strategy.

That said, Avry as a main character was able to stand on her own and continues to kick butt. At 21, Avry is brave, independent and a skilled fighter. I love to see strong female characters kicking butt and taking charge and Avry does just that.  As difficult as it is to be separated from Kerrick, Avry doesn't take the woe-is-me-I'm-nothing-without-my-love attitude. Which is a good thing because her focus needs to be on using her skills to help stop Tohon and his dead from taking over.

The point of view switches back and forth between Avry and Kerrick. This was vital to making the story more interesting. Let's face it, Kerrick's my favorite and I especially love the parts with him in it. The story's just going along, going along, la-de-da, not bad.  I get to the last 20ish pages or so and then BAM. CLIFFHANGER CITY! WHAT the WHAT!?! What's going to happen next?? EEP!
Immediately drawn back in.